On the heights of the village of Frebécourt, the Château de Bourlemont catcches the eye. From this headland anchored in the landscape of the Western Vosges, it dominates the Meuse valley, in which the surrounding villages, the Saint Joan of Arc Basilica and the many forests in the vicinity can be seen.Since its origin, in the 12th century, it has been transformed and enlarged over the centuries. At the beginning a modest quadrilateral, it was first enlarged in the 13th century with the construction of its imposing round towers. Its two-storey dwelling overlooking the courtyard, its south wing and its chapel were built at the end of the 14th and at the begining of the 15th centuries. In the 19th and 20th centuries, the works turned it into a private residence and a park and gardens were added to transform it into the current estate : the entierty of this natural setting was the work of two great landscape architects, Paul de Lavenne de Choulot and Achille Duchêne.Throughout its 900 years of history, the castle has belonged to only three families : the Bourlemont, owners from the 12th century until the end of the 14th century, the Anglure until the 18th century (1732) and the d'Alsace family, who bought the estate in 1770, after it was abondoned for almost 40 years.Essential part of building listed in the "Inventaire Supplémentaire des Monuments Historiques", the chapel the Château de Bourlemont is dedicated to Saint Vincent. Built in the 15th century and then rebuilt in the 16th century, it has a rich religious heritage, including an altar dating from the Middle Ages, a remarkable sepulchre from the 16th century and a statuary that shows the 16th century Lorraine religious art. In this chapel are kept the funerary monuments of the Anglure and d'Alsace families, whose descendants have been buried there since 1770. 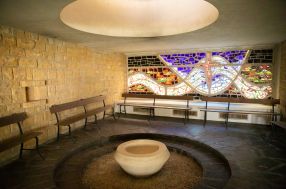 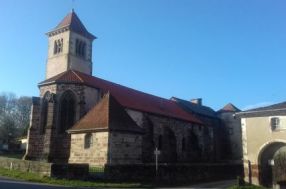 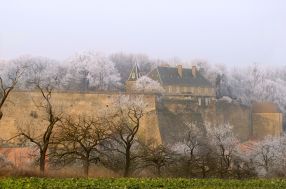