Built in 1045-1050, the Crypt of the Church of Saint Pierre de Remiremont is one of the oldest Romanesque religious monuments in the Vosges. It consists of 3 chapels and has been classified as a historic monument since 1983. The crypt, built of sandstone, occupies almost the entire surface of the choir of the upper church. It is composed of a central chapel with eight columns and three vessels of five bays, illuminated by five small semicircular bays. It is flanked by two side chapels. The complex ends with three hemi-circular apses. The northern chapel known as the Saint-Antoine chapel (13th century chapel) has delivered 15th century wall paintings. These, in addition to Saint Anthony himself, represent among others the Crucifixion, Saint Lawrence, Saint Brice and Saint Martin, bishops of Tours. In 2002, exceptional frescoes from the 14th century were discovered in the southern chapel: a paschal lamb, the Magi, the Emmaus pilgrims and Saint Christopher. This chapel also houses some treasures that were used during the "quake processions": crowns in gilt vermeil and precious stones, monstrance and chalice. The other two chapels are open access. To be noted: The south chapel is only open during guided tours organised by the Tourist Office on wednesday at 10am in July-August and all year round for groups on request: French language tour). 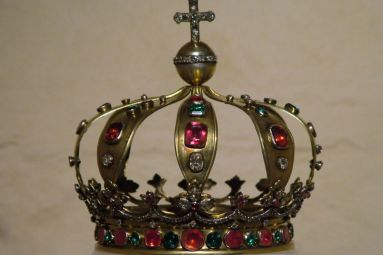 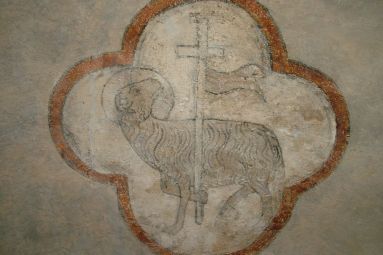 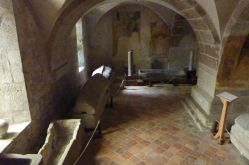 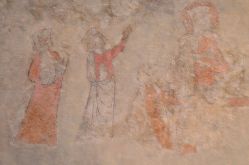 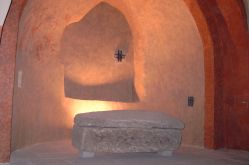 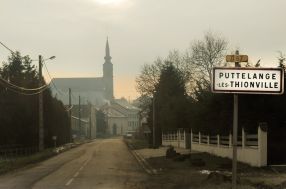 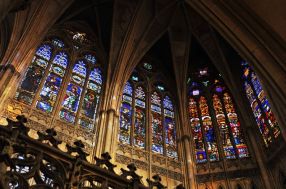