Thanks to the FFRandonnée and the village of Xertigny for the creation of this hike and for the work done by their teams throughout the year to mark out and maintain these paths. Marking: yellow rectangle n°9. An 8km panoramic route in a typical landscape of the Vôge, amongst pastures, fields, and forests, and crossing the hamlets made of former farms from the Vallée de l’Aître to the crests of Moyenpal. This trail works in a loop from and to the Woodies (car park in the Vallée de l'Aître). It can be done in both directions from the junction at the 29 rue Georges Colnot, following the numbered markers 09. The Woodies area consists in a group of holiday accommodations built on the initiative of the town of Xertigny and the Pays d'Epinal to embody the possibility of using beech wood in construction. For more information, see the terre de hêtre website. Key places: • (1) At the corner of the retirement home, you can observe the foundation stone from 1686, 40 years after the end of the Thirty Years’ War which caused the total destruction of this area – which was one of the two centres of Xertigny, with Le Thillot. • (2) At the 65 Chemin de l’Usine, there is a farm from 1703 which was apparently built with the stones of the former abbey. It was occupied by Prussian people in 1870. Observe the door of the barn, the frontage, and the writings on the right (Basque cross). • (3) Haut de Moyenpal: a double-housed farm from 1712, a shared barn (see the cross of Lorraine on the door for the carts), an adjacent chamber oven. A must-see is the “Palis” at the crossroads (rocks as fences). • (4) Elevation 486, known as Croix de Mission (not indicated): look westwards at the forest of Darney, the Monts Faucilles near Lamarche at 50km (same latitude), the Mont des Fourches (503m), the col de Poirier near Vittel (433m), and the plateau of Sion-Vaudémont. 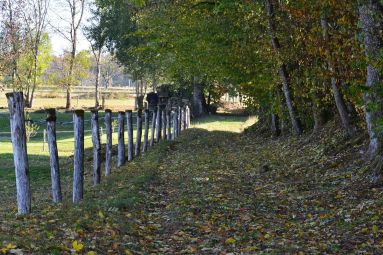 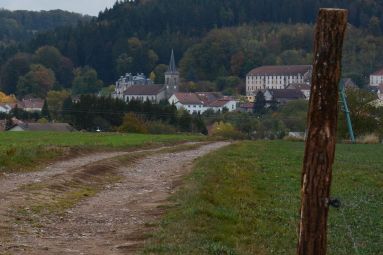 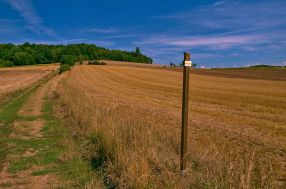 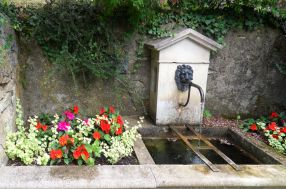 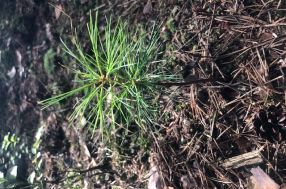