Rue Stanislas is located in the heart of Plombières-les-Bains, between the Place de l'église and the Place du Bain Romain. You can see various important buildings in the history of the spa. - Stanislas Bath (or Ladies Bath): for a long time it was called the Queen's Bath in reference to the fact that the Lorraine duchesses frequented the bath. A modest building with a rectangular plan rebuilt from 1733 to 1736. Building on the ground floor comprising a main building with a square return, a closed courtyard and a small main building. The building was completely rebuilt from 1752 to 1758 in the same condition as it has survived to this day. Sold in 1791, the bath was bought by the State in 1836. Construction of shower cabinets between 1909 and 1939. Modernization work in 1951-1952 and 1955-1956. The interior distribution was largely transformed in the 19th and 20th centuries, mainly on the upper floor. The attic retains five 19th century lead-lined wooden tanks with floats and piping. - Hôtel des Bains (N°7 Rue Stanislas): Former Aubergerie de l'Ange where Montaigne came to make a mini cure (11 days during which he drank 8 to 10 glasses a day, he was, in fact, in a rather hurry). Hortense de Hollande (mother of Napoleon III) stayed there as well as Voltaire who came to rest and hide. Beaumarchais lived 1 year in Plombières. Other famous people have come to the resort: De Musset, Lamartine, Berlioz (" Les Troyens ") - Galerie des Arcades: seasonal exhibition space; workshop of the embroiderers of the association Fil et Détente. - Fountain known as the Source of the Crucifix (1762) with the gate, the crucifix and the three plates with inscription, located on the ground floor of the Arcades building: inscription by decree of 5 July 1926. Staircase, handrail, Crucifix gate are classified and were made by an ironworker André Gillot (a student of Jean Lamour). - Hôtel Résal (N°4 Rue Stanislas): Josephine de Beauharnais ; || He had been treating his infertility since 1798 (then for 5 years). She fell from the balcony of this house on June 20, 1798 with 3 other people. Royal Palace or House of the Arcades (1761; 1762): Street front and large staircase (inscription by decree of March 2, 1927) - DEKLIER (project manager); DELILLE (project manager). 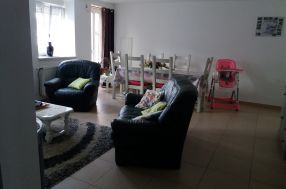